You are receiving this very limited edition of our BOOKBIOBOARDGAME for an extended reading of Voodoo Libretto: New and Selected Poems, by Tim Seibles, released in early 2022. Rereadings may be done alone or in pairs at your preferred light source and hour. A few members of our expert reading laboratory have reported enjoying the game best with Derridean deconstructions of the erotic in Tim Seibles. Our principles for enjoying the game are interchangeable with those of the Frank O’Hara Meditations in an Emergency Room and Board Game and the Bob Kaufman Golden Sardine Eating Board Game. But with Seibles we wanted to examine a classic midcentury Black baby boomer ironman work-a-day poet. Seibles is a poet who straddles our poetic past and future like Janus, the god of entrances and exits.

You are also receiving our Encyclopedic Century Poet Magic Reversible card deck. One side bears images of our extensive and ever-expanding collection of quintessential poets* and one side is a slanting mystical tarot deck of poetry trivia, scholia, tidbits, and footnotes.

*We define “poet” as anyone who has ever written a true poem.

“The Word 1964–1981” from Body Moves, his 1988 debut, begins, “In Philadelphia / I went back to the school / we integrated. The bunch of us / had no idea how big a deal it was.” The scene returns twenty-four years later in “Allison Wolff,” from 2012’s Fast Animal, a National Book Award finalist: “Was she Jewish? I was seventeen, // an ‘Afro-American’ senior transferred to a suburban school / that held just a few of us.” The poem speaks in the register of memoir and the timbre of personal letters. The references to “the bunch of us” and “few of us” across the poems underscore the communal and cultural confidence encircling the racial interaction. In “Allison Wolff ” “the monsters that murdered / Emmett Till—were they everywhere? / I didn’t know. I didn’t know enough.” In the poem, Black nationalism tangles with integration. Freedom tangles with cultural solidarity. The poems are full of brothers, Black men and Black boys, Black fathers and sons in earshot of Till’s murder.

We encourage you to look closely at the measure of time in the body of work and in the body of Tim Seibles in America, and the spirit of his poems on earth. 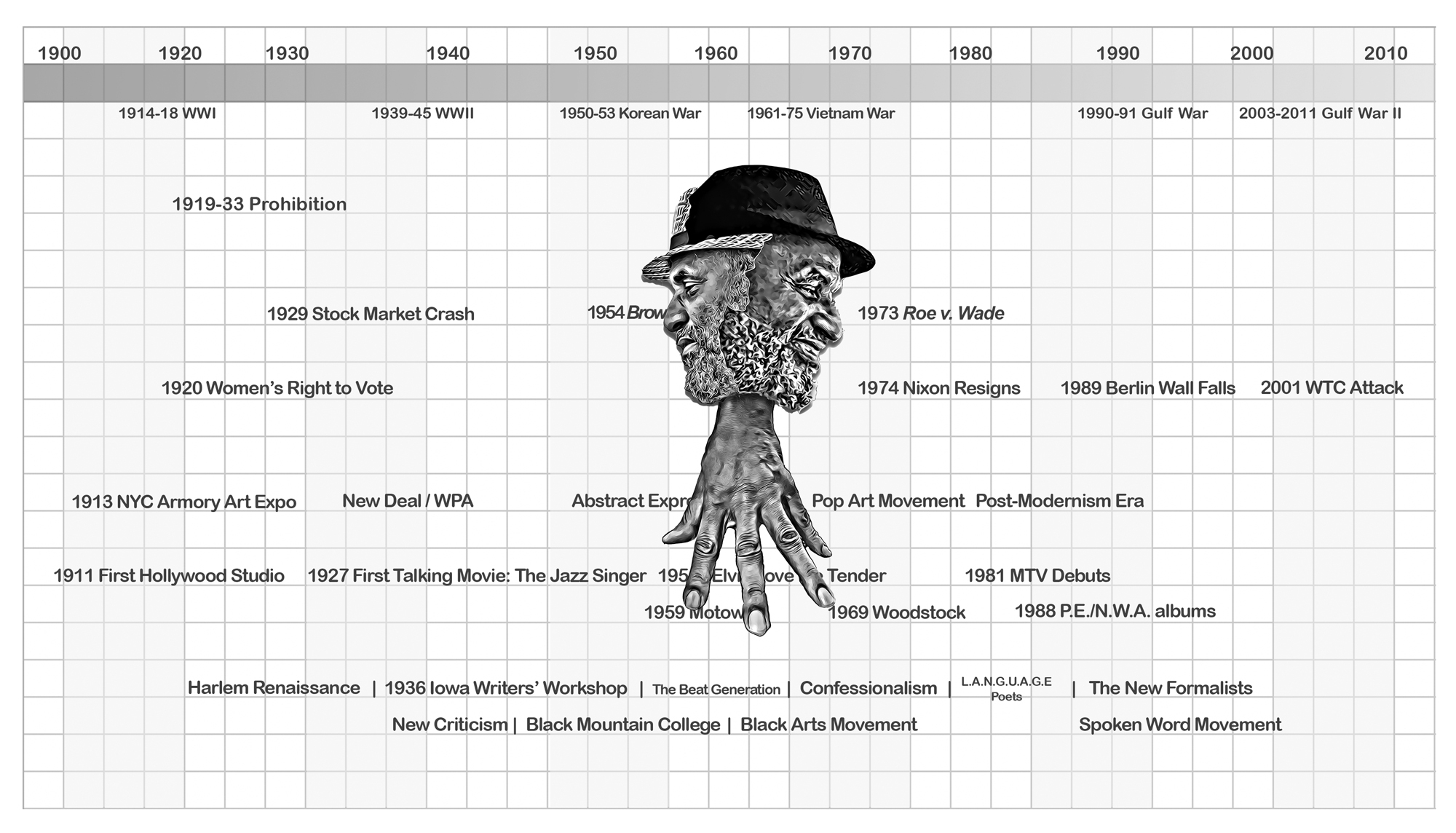 your tim seibles charm
make sure all poems have been experienced before assembly. Remove the Janus-head and insert a watch battery (not included) beneath the hat. Assemble the parts of his grasp and reach first. The fingers are delicate. To prevent typos and bruises, do not use excessive force. Seibles belongs to a diminishing breed of troubadour poet, a tribe of bards and guitarists with agile oversized hands, angular Thelonious Monk goatees, and smiles full of affectionate vocabularies. In Body Moves, the poem “The Snail” opens, “Sisters, / I am weak of your kisses / the wanting of them,” announcing the images of mouths and kisses that will populate the poems. Seibles is a romantic.

Attach his vision to motion for enhanced visibility and mobility. Magical charms are attached to the touch of the poet, with (as Seibles writes in “Ode to My Hands) “each finger a cappella, sing- ing / a song.” The catalogue of “lubricious dimensions” includes “women sailing the streets” before closing on two hands “an unreasonable world.”

Once the lower and upper parts of the charm are connected, snap your fingers.

Play
this game demands careful emotional research before you actually start to play. There are no restrictions on how you may interpret the words. Once settled upon, you may shift your properties and opinions according to analysis and evidence.

On your first turn, roll the die and select which poets you want to influence the reading of which poems. The other player draws a card and invents a question about Tim Seibles. If you answer the question correctly you continue your turn by rolling the die again.

playing
each of your turns concerns getting and placing new poets in conversation with Seibles. On your turn, try to fit your poet card to the Tim Seibles charm via reading, writing, or reciting. But be careful: Winning battles will depend on vision, technique, and risk. You draw the card of Wanda Coleman and it is Black History Month in Ohio at the Rainbow Conference. You sit with Tim Seibles listening to Coleman’s poems and bangles. You draw Michael S. Harper, and Harper’s poetry collection Dear John, Dear Coltrane (1970) appears levitating above the gameboard. You sit with Tim at Cave Canem listening to Harper hold court. Sometimes you imagine Tim Seibles touring Coltrane’s home as a teenager in Philly. Or you walk the campus of Old Dominion. Virginia is a land of poised and curious Black people.

If the interior and exterior are unevenly matched, you will still have an exciting game excursion. But when all is balanced, all is changed.

persona poets game version
some fans will have first come to Tim Seibles in the guise of a persona poet, through his early-career poems—“Natasha in a Mellow Mood,” “What Bugs Bunny Said to Red Riding Hood,” “Vocabulary Brother: The Editorial,” “Blade, The Daywalker,” and so on. These poems’ contexts are pop cultural, theatrical, and hypersexual. In “Natasha in a Mellow Mood,” Seibles squeezes comically into Natasha’s mood and dress: “I want your mischief / riddled eyes to invent / my whole body, all the silken / slopes of flesh forgotten / by the blind cartoonist.” The early poems reveal a poet who roams freely between forms and subjects. In this version of winning, the game players select speakers from Tim Seibles’s persona poems and compete in a combination of charades, impersonations, and recitals.

strategy
fans, in voodoo libretto you encounter the inner and outer realms of a work-a-day poet. While an undashed workaday can mean commonplace, the hyphens in work-a-day restore the extraordinary work/labor involved in maintaining any sort of work/practice. This is a poet who works his days into poetry. Voodoo Libretto’s three hundred pages contain the frequencies and multitudes of Tim Seibles’s life in poems. One way to have a winning reading experience involves placing Seibles’s poems along a spectrum of personal and public history. Tim Seibles situates his life within a narrative of contemporary American culture. His poems narrate our common humanity and highlight what is uncommon about the commonplace and extraordinary about the ordinary. Seibles’s voice in the poems has the inflections of memoirist and journalist mixed with bluesy avuncular troubadour. The result is a feeling of natural experience. Our aim is to stimulate that feeling in your reading of the poems. This very limited edition of THE TIM SEIBLES BOOKBIOBOARDGAME positions Seibles as a key to understanding the importance of poets who simply go about the work of a poet each day.

winning the game
when a player enters another poetic dimension, the game is over, and the reader may take the magic card deck to another book of poems or reshuffle for a new game with Voodoo Libretto.

sample board game recap
i played the following creatively improvised game against my shadow. (The shadow makes a Janus of the self.) It was all about poetry and probability, and I was pretty sure I was going to lose trying to read between the lines. I wanted to ponder the relationship between Bob Kaufman and Seibles, but I never drew the Bob Kaufman card. I never got to meditate on Seibles and Essex Hemphill. Or Seibles and Lynda Hull, both of whom spent time in Provincetown. This mercurial current edition of the magic card deck has a shortage of experimental poets, though all true poets are experimentalists. Most of the poets outside the old-fashioned literary canon are overlooked or undervalued, hideous or simply hiding out. I was happy to think about Seibles and several women poets in this game. I’m still thinking about Seibles, the erotic, and Audre Lorde. Several of the cards I drew are not included here. Nor is evidence of the tie-breaking extended couplet playoff overtime round against my shadow. I won by rhyming hideous and hideout. 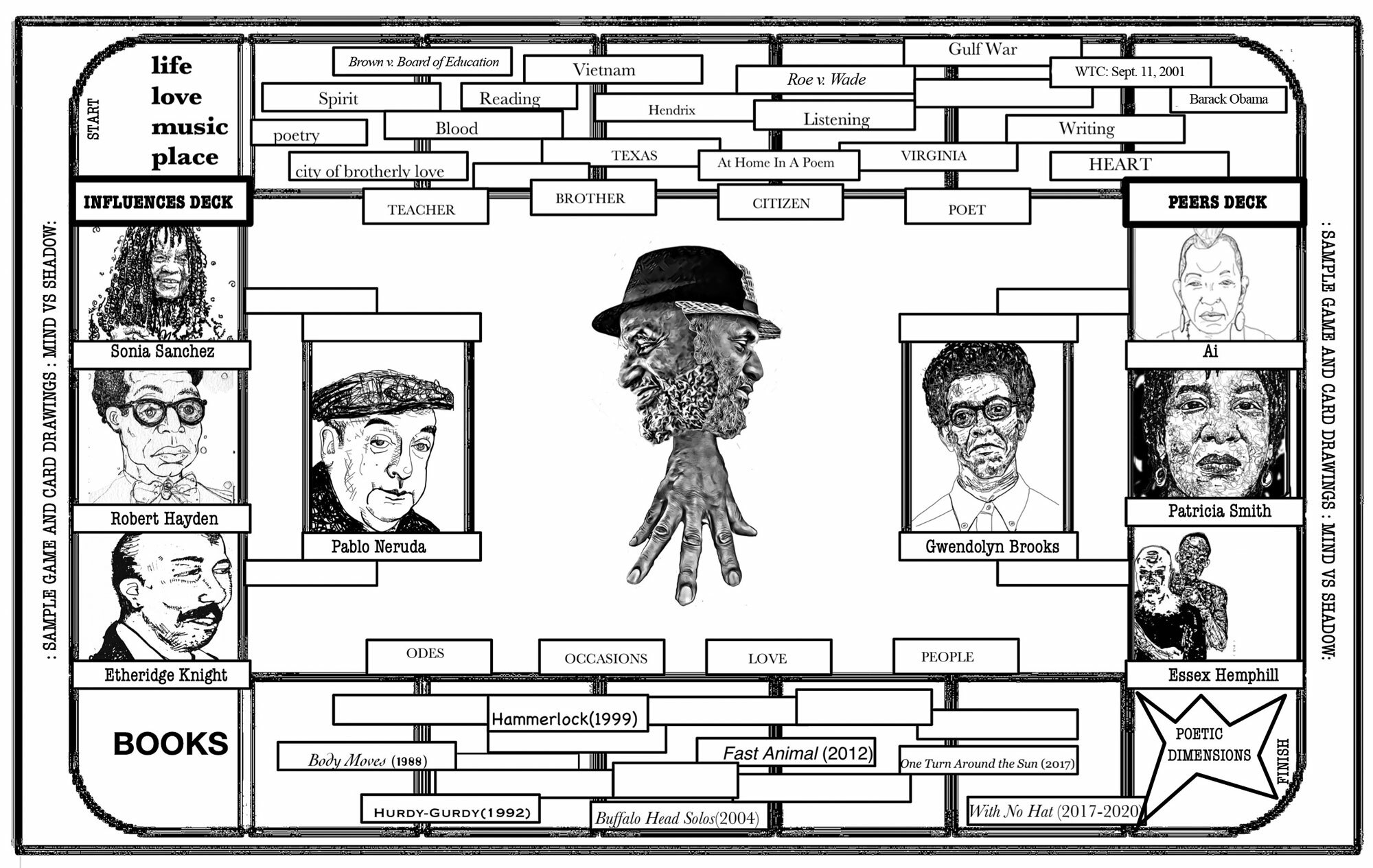 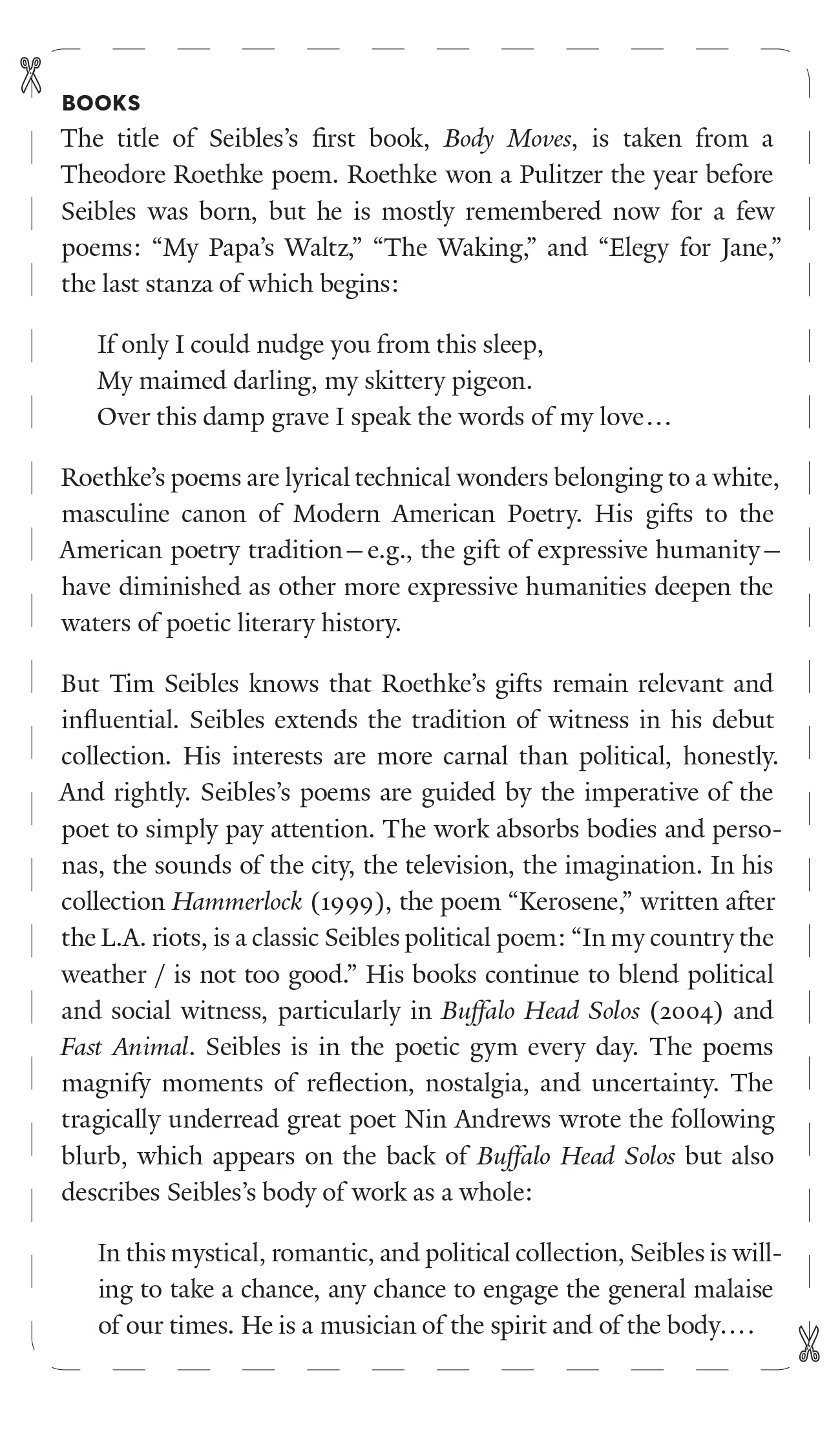 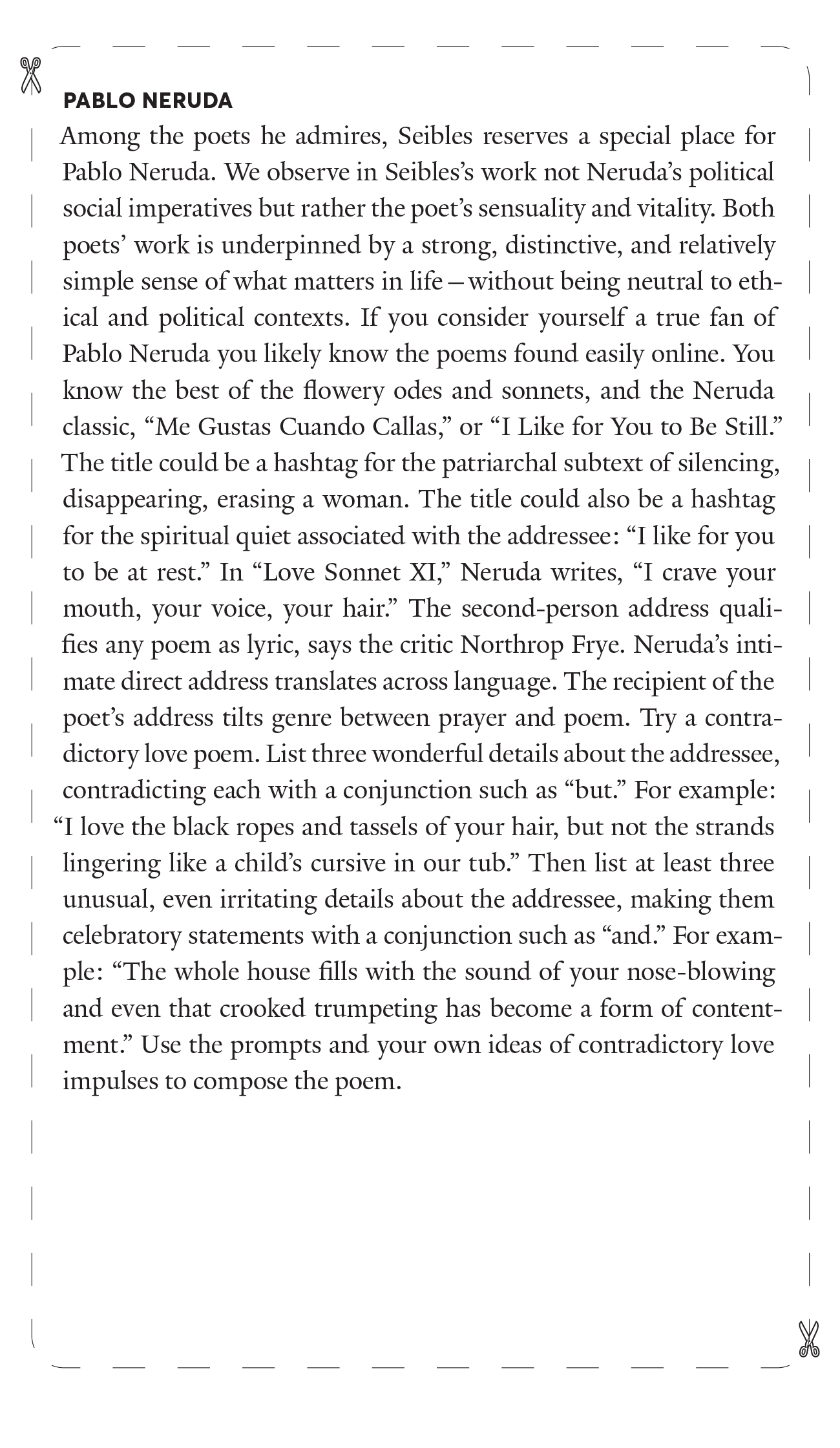 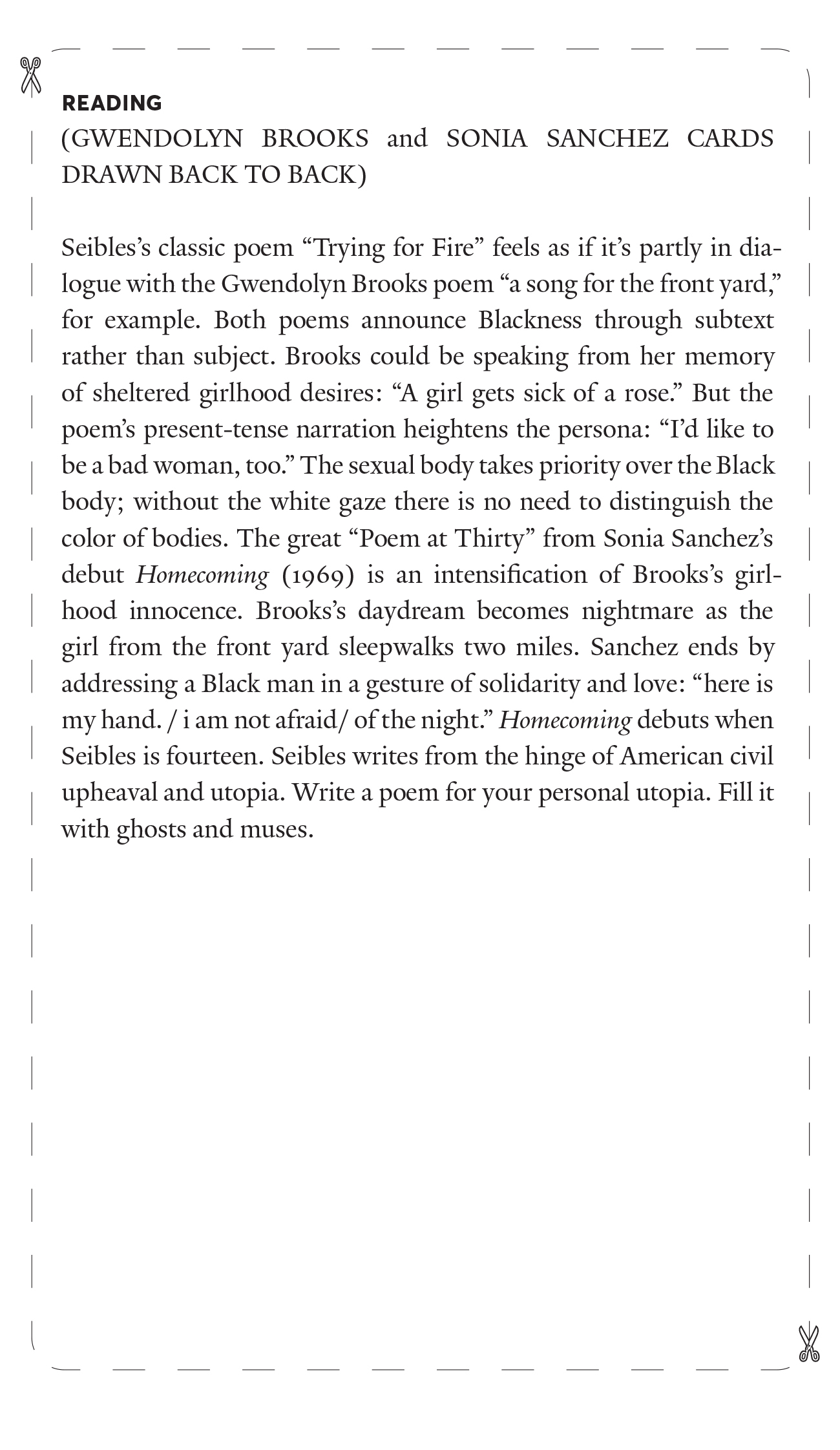 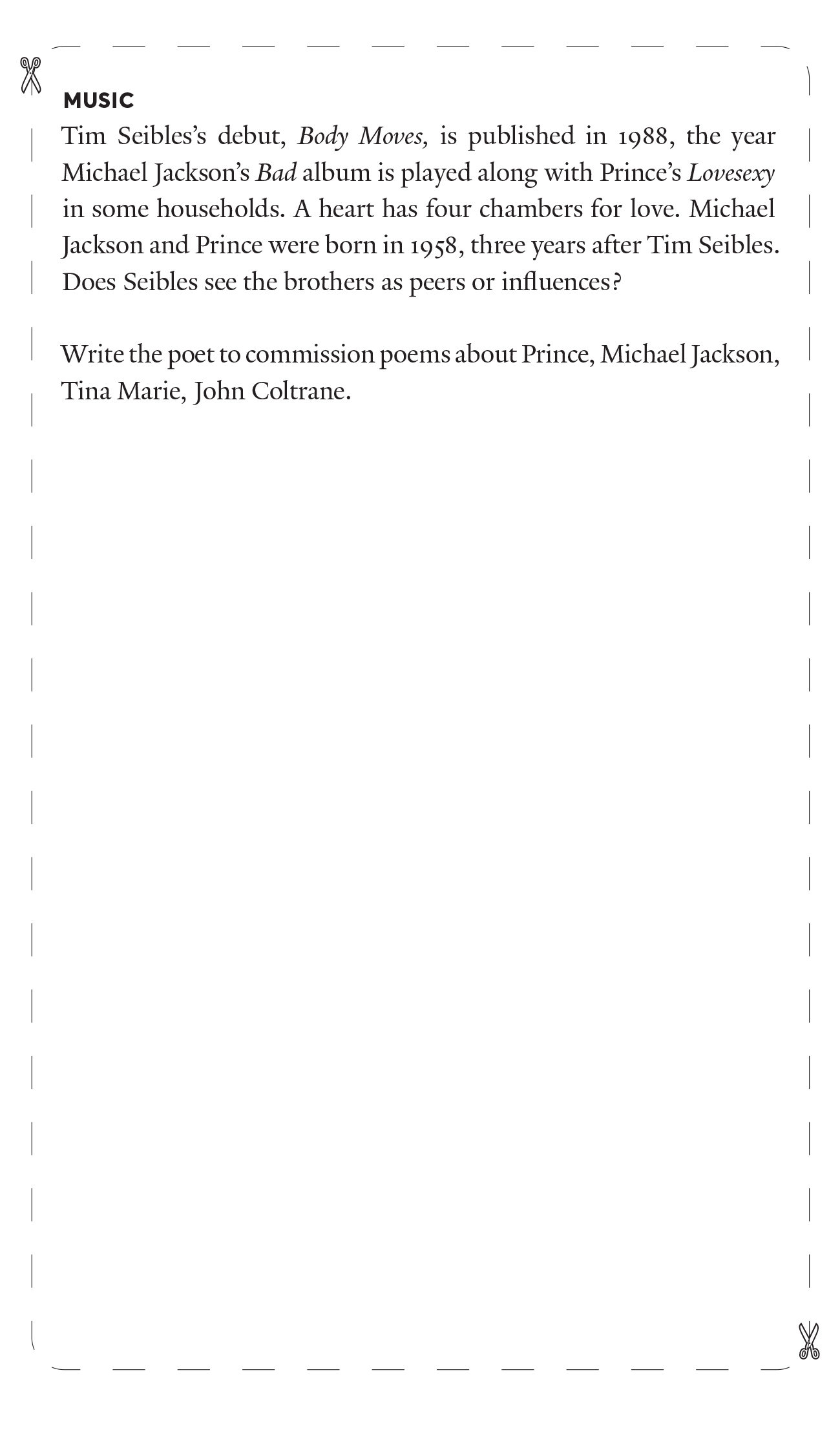 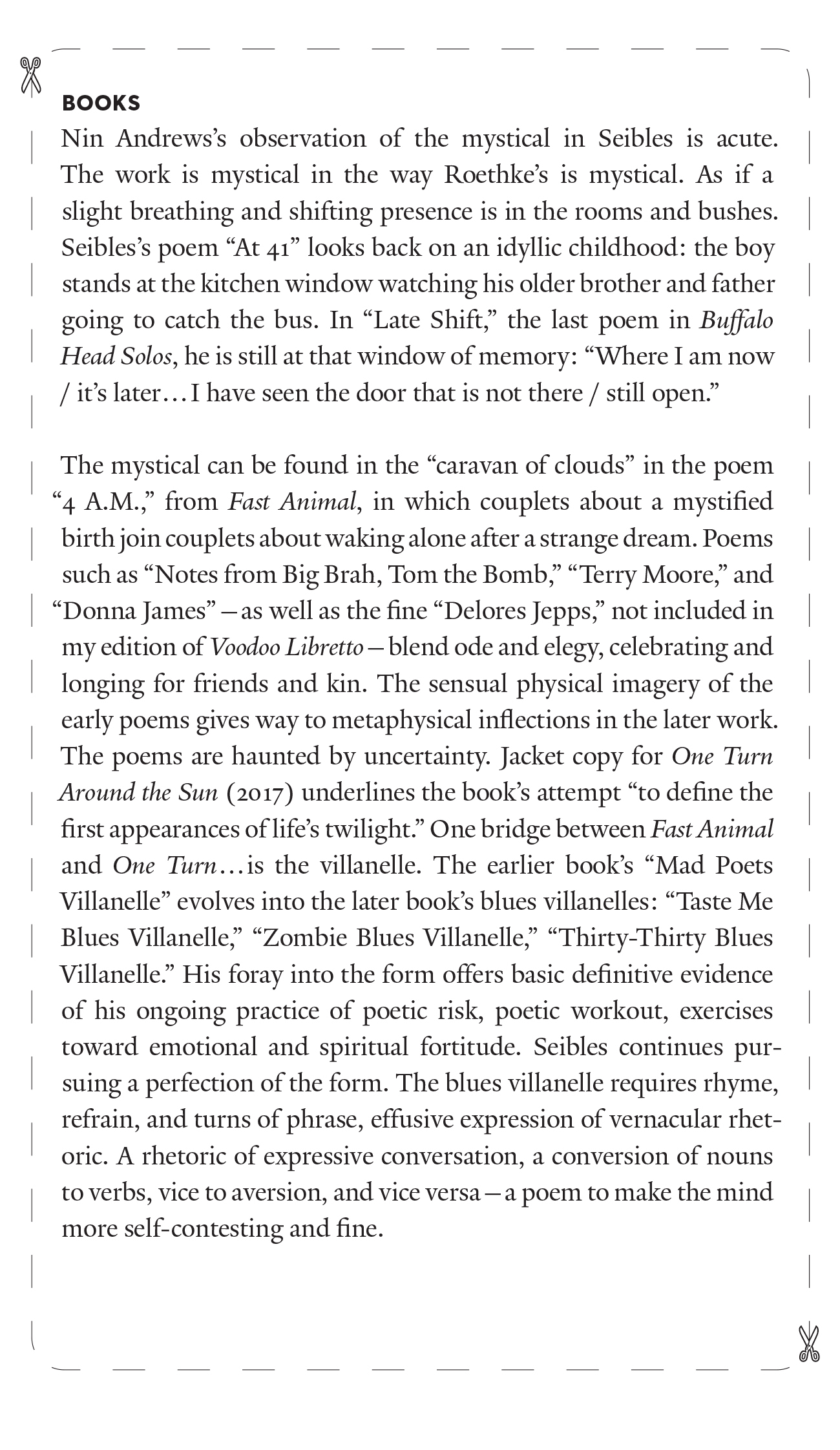 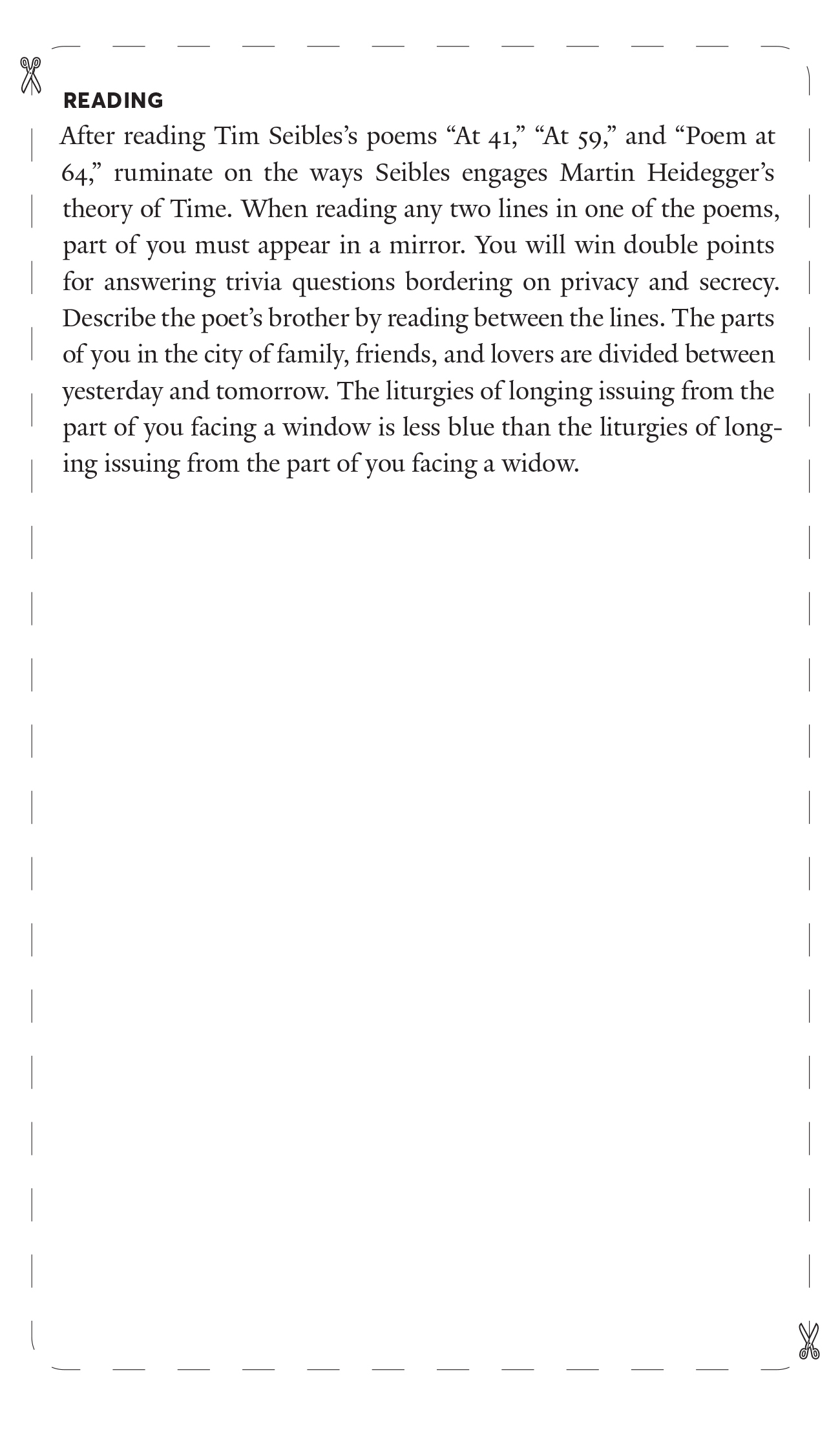 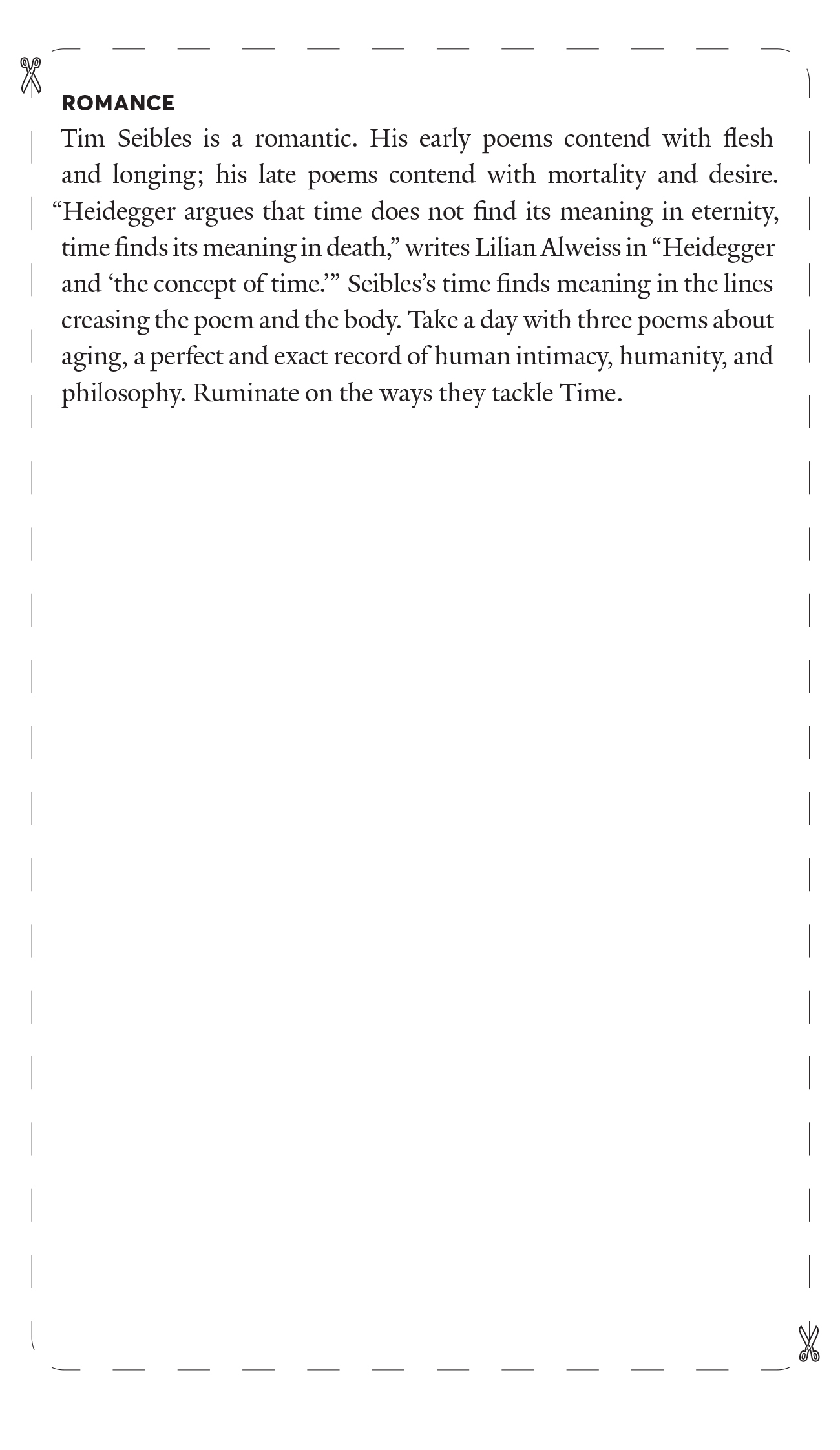 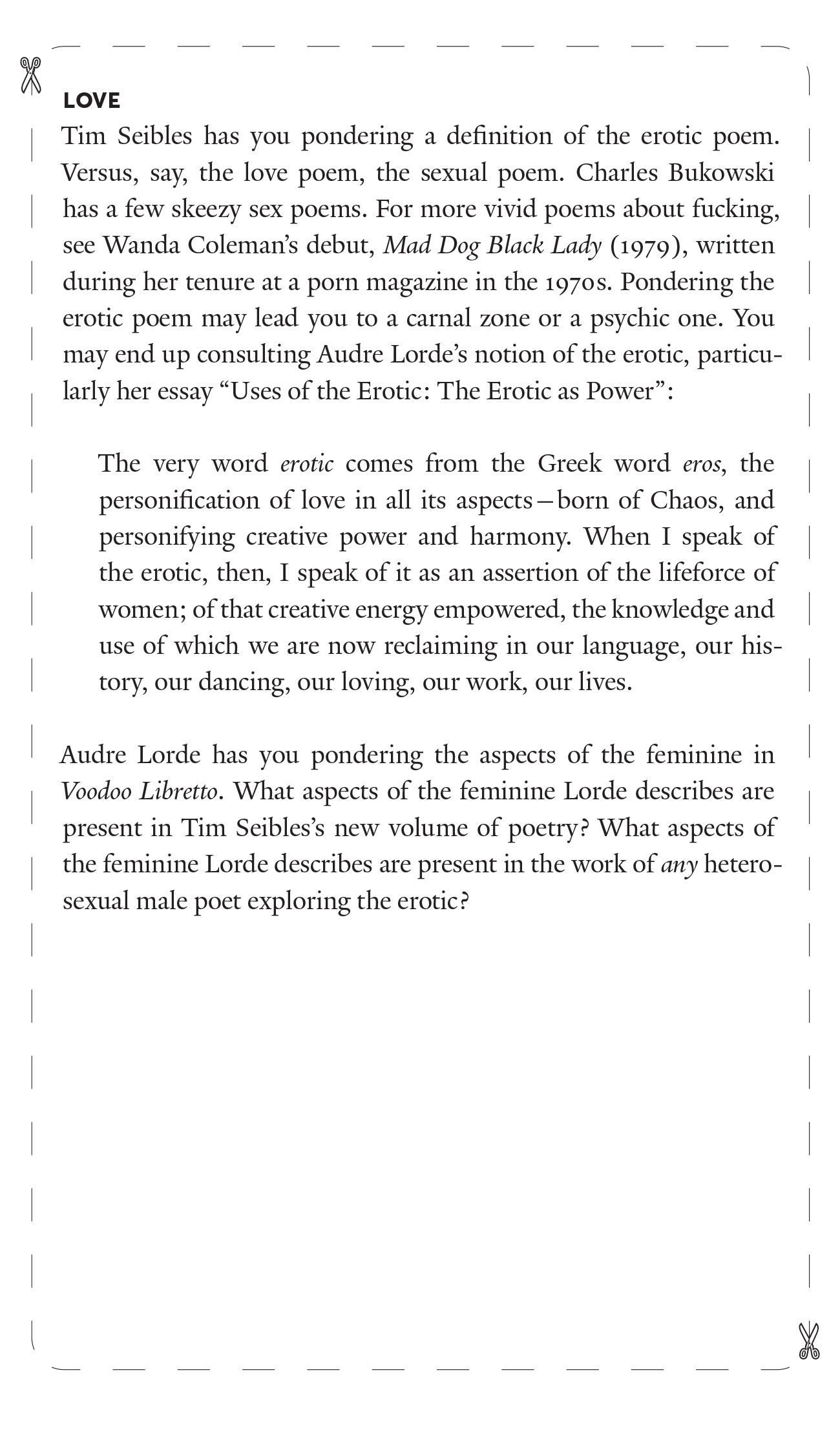 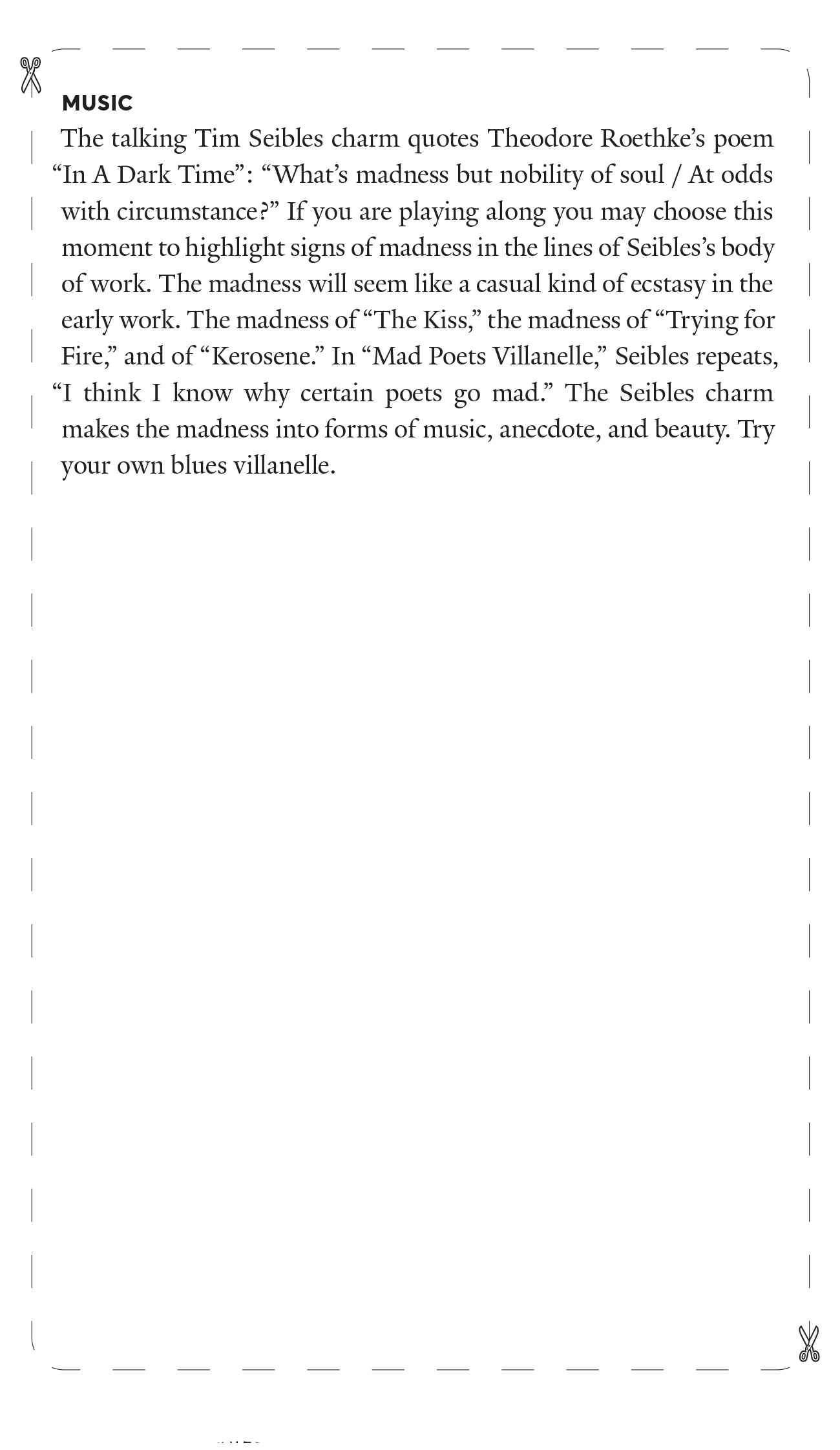 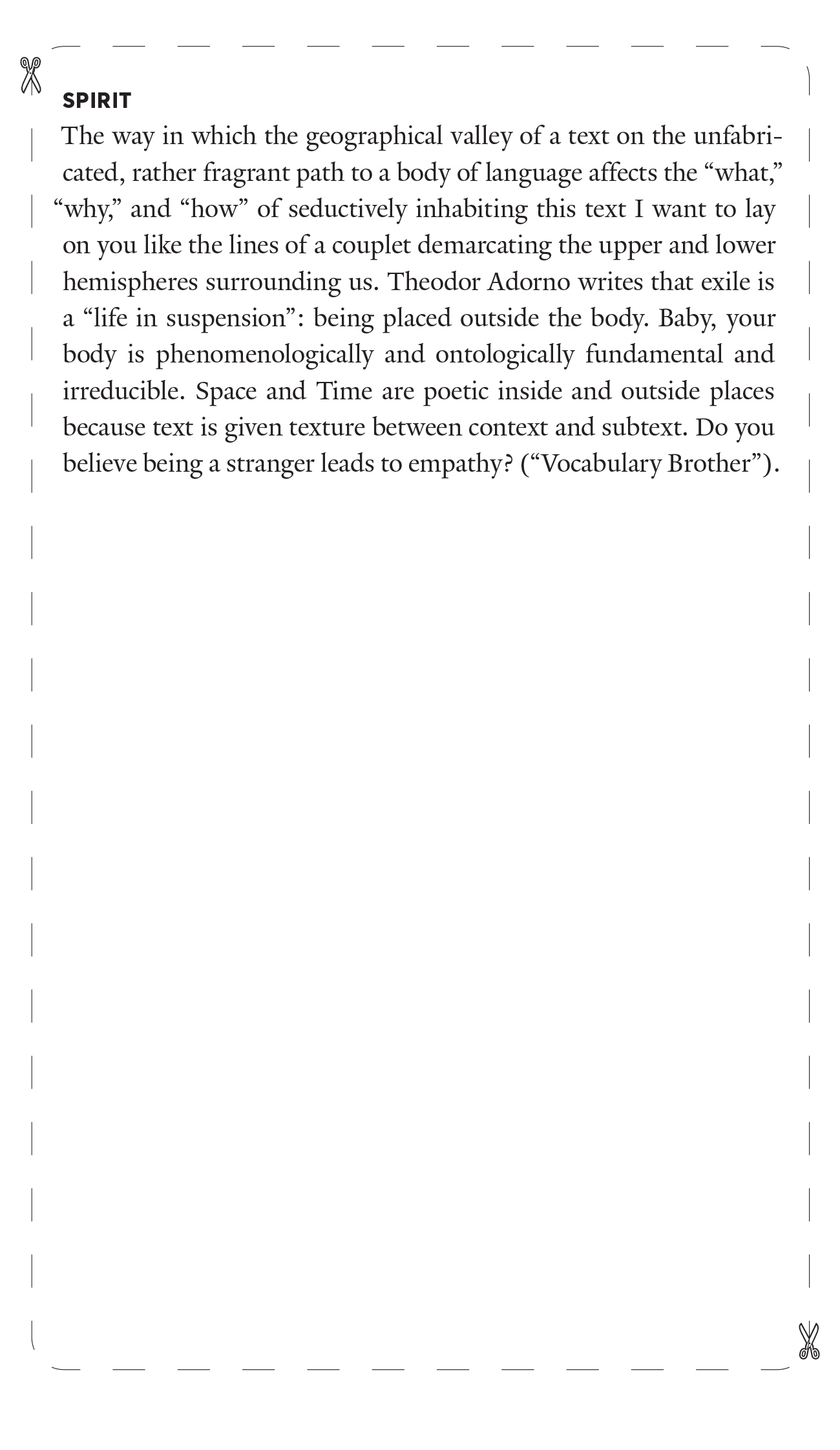 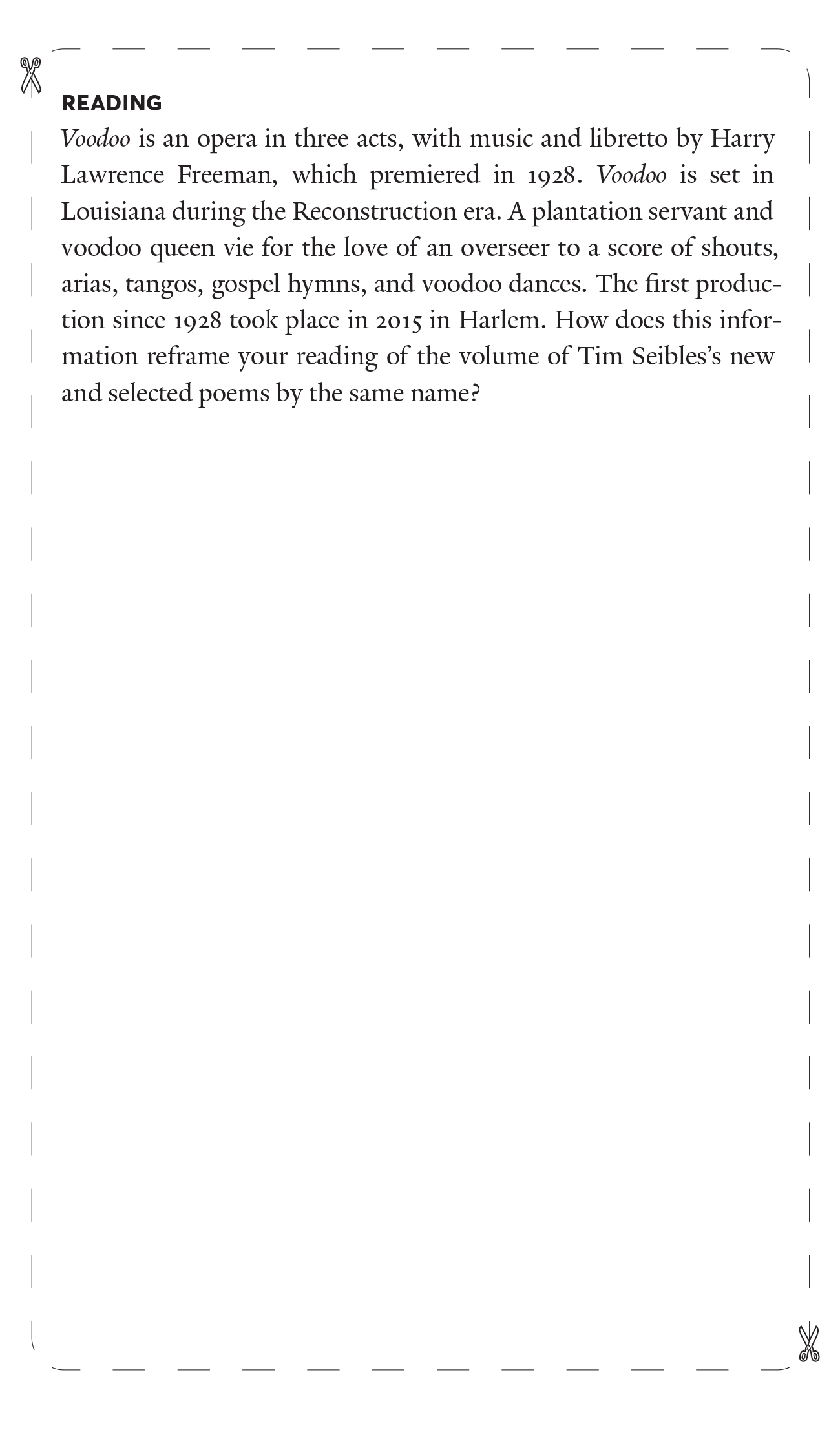 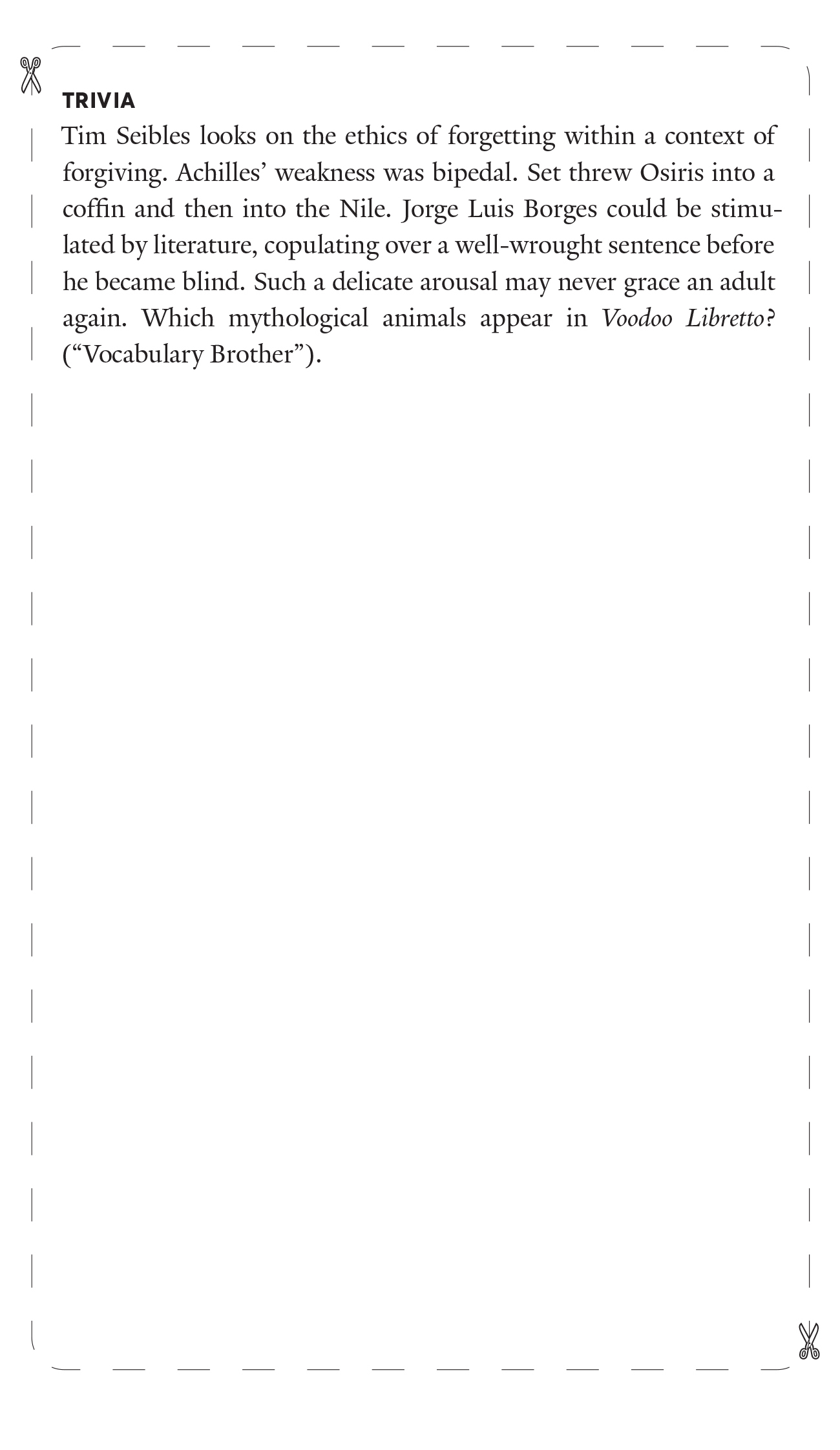 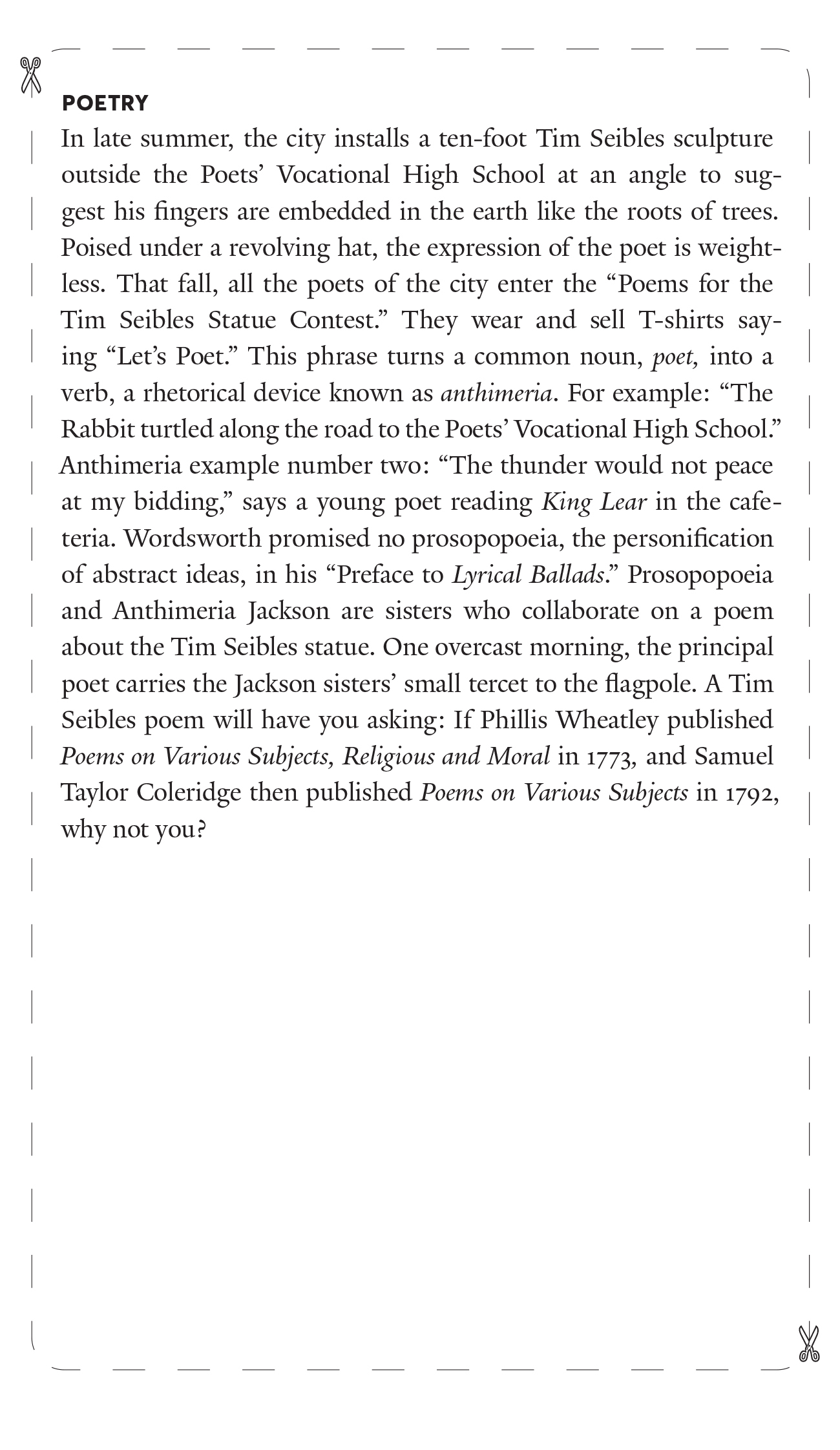 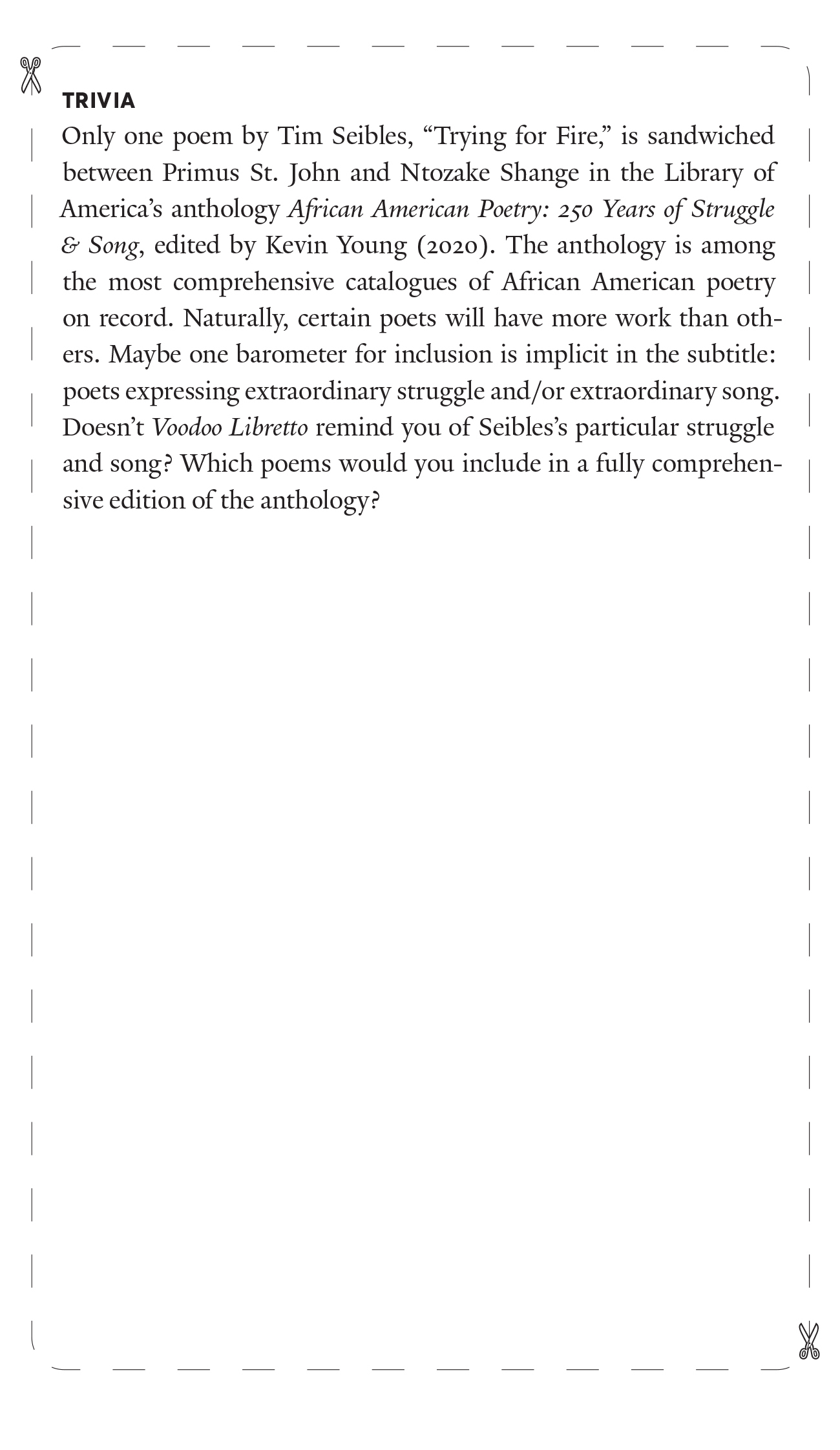 Terrance Hayes is the author of American Sonnets for My Past and Future Assassin and To Float In the Space Between: Drawings and Essays in Conversation with Etheridge Knight. He is a professor of English at New York University.

Sign up for The Yale Review newsletter and keep up with news, events, and more.
TAGS
NonfictionCriticism Summer 2022 Terrance Hayes
Originally published:
June 1, 2022
See this issue

The Abortion Stories We Tell

Do we need to be more radically honest?
Maggie Doherty
Essays

Sign up for The Yale Review newsletter and keep up with news, events, and more.

Join a conversation 200 years in the making. TYR members receive a 1-year subscription plus special perks, like early access to our events and more.

Join a conversation 200 years in the making. TYR members receive a 1-year subscription plus special perks, like early access to our events and more.